The Story Behind The Dynasty

When a Chassid learns about the Rebbes yichus, he too becomes a part of it

1. Grand Rabbi Yaakov Yitzchak Rabinowitz, the “Holy Jew” of Peshischa (1766-1813), disciple of the Chozeh of Lublin.

Grand Rabbi David Mattisyahu Rabinowitz was born in Shedlitz, Poland on the eve of Hanukkah, 5689, (December 7, 1928). He was named David after his great-grandfather, Rabbi Nathan David of Shidlovtza, and Mattisyahu after the hero of the Hanukkah story, since his bris was on the seventh day of Hannukkah. Already as a small child, he would wake up early to learn Torah and to pray with a fiery love of God, a way of prayer that he would follow his entire life.

During the difficult years of the war, his father was exiled to Russia. Young David Mattisyahu, together with two of his brothers and his sister, escaped to Tehran, Iran (Persia). The children came to the Holy Land with the transport known as Yaldei Tehran (the Children of Tehran). When Rabbi Yoseph Kahaneman, the Ponevezher Rav, heard that the children of the Biala Rebbe had come to Eretz Yisrael, he made special effort to make sure that these children were taken to live a Torah life.

Rabbi David Mattisyahu learned in Yeshivah in Ponevezh, with a devotion to learning Torah constantly, and was reknowned in Yeshivah for his warm prayers, and was often picked to lead special prayer services on holidays, especially the Hallel service. The entire Yeshivah was inspired by his fiery devotion to prayer. His father, Rabbi Yechiel Yehoshua, the Biala Rebbe, arrived in the Holy Land in 1947, and was reunited with his children. Rabbi David Mattisyahu got married then, and received his Rabbinical ordination from Grand Rabbi Yoseph Tzvi Kalish of Skernevitz, the Chief Rabbi of Bnei Brak, a scion of the Vorki dynasty.

Grand Rabbi David Mattisyahu set up his Hassidic court in Bnei Brak, where he spread Torah and Chassidus with a passionate fire. All who saw his passion in prayer were deeply inspired. He would spend one Sabbath every year, during the three weeks, in the Old City of Jerusalem, near the Western Wall. He would also visit America every year to spread the fire of Biala Chassidus and awe of heaven. He authored a commentary on the Torah called Lehavas David. 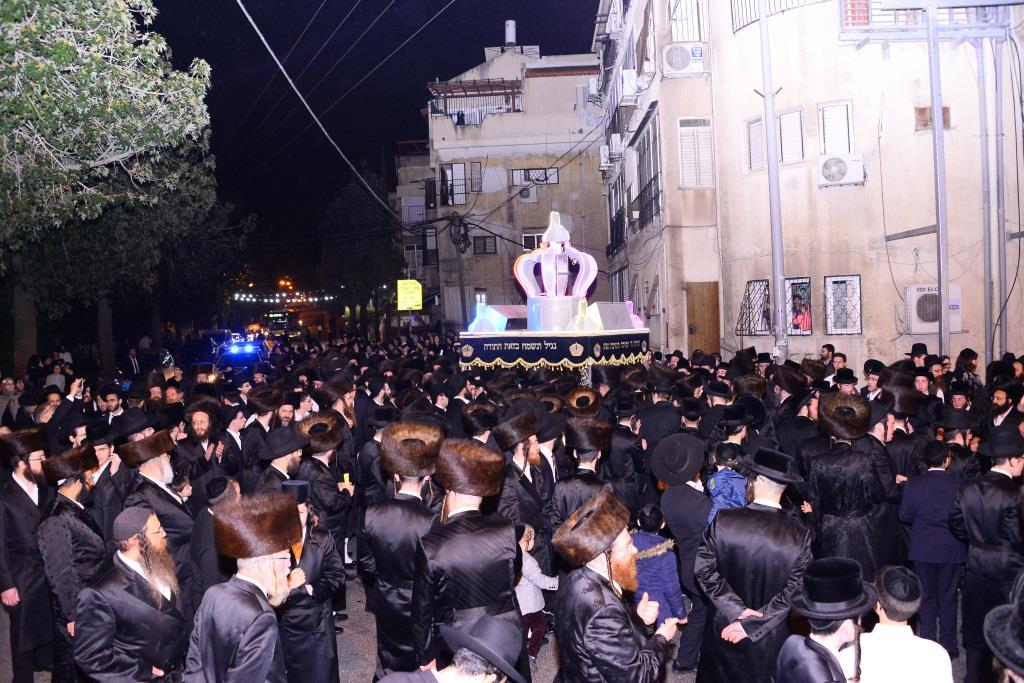 When the Nazis came to Shedlitz during the Holocaust, the Rebbe was imprisoned together with the other residents of Shedlitz. When they brought him to work he miraculously managed to escape and hid in a bakery for several days. Together with his family, the Rebbe escaped to Russia, after a failed attempt to escape to London to be with his brother, and was spared from the horrors of the Holocaust. However, the Communists exiled the Rebbe to Siberia where he was tortured for many years, and forced to be a rope maker. There, in Siberia, the true greatness of the Rebbe was revealed. He did not give up even the slightest iota of his customs. He even broke the ice of rivers for daily mikvah immersion.

He was once almost killed by a Russian guard who mistook the Rebbe for an animal in the river, but he was miraculously saved. Despite the suffering he faced there, the Rebbe managed to clandestinely organize a congregation from the Jews there for communal prayer and Torah study. In the late hours of the Sabbath nights, the Rebbe even lead Hassidic tishen for the Jews captive in Siberia, in the hours after returning from the forced labor imposed upon them. Once, on Rosh Hashanah, the Rebbe was standing in devoted prayer, leading the congregation, when the Russians entered. The entire congregation fled in fear, but the Rebbe was unaware of their entrance amidst his intense prayerful ecstasy, and was severely beaten by the guards. During the entire time the Rebbe was in Siberia, the Communists tried to break his mighty spirit. Once, the Communists confiscated all of his Holy Books, to prevent him from learning Torah. The Rebbe was overcome with a desire to learn the holy book Noam Elimelech by the Rebbe R. Elimelech of Lizensk, zt”l. One erev shabbos, the Rebbe could not bare any longer to be parted from the sefer, and snuck into the guard house where his books were being held. The Rebbe searched through the books and managed to take the Noam Elimelech without anyone seeing him.

The Rebbe spent five years in Siberia, and then returned to Poland, to find his entire life from before the world in ruins. The Rebbe went from Poland to France for a short time. In 5707 (1947), the Rebbe came to the Holy Land, where he was worthy to rebuild the illustrious dynasty of Biala, a remnant of the dynasty of the Holy Jew of Peshischa. The Rebbe settled in Tel Aviv and was well received by the Holocaust survivors from Poland who also settled there. Many young people came to learn from the ways of this holy tzaddik. All who saw the Rebbe were in awe of his righteousness. He would spend most of the day crowned with his tallis and tefillin. He was renowned for his intense prayers, which would take many hours. He was most famous for his carefulness and concentration in the recitation of Krias Shma. He would often tell those who came to be blessed by him to be extra careful in reciting Shma. He would go to great lengths to perform mitzvos, including many which are not sought after by the masses. He would go out of his way to perform the mitzvah of kissui hadam, covering the blood of poultry after kosher slaughter.

The Rebbe authored many Hasidic books, including Kedushas Chelkas Yehoshua and Seder HaYom.

In his final years the Rebbe fell very ill. In the midst of the weakness and pain of his illness, the Rebbe amazingly strengthened his efforts in avodas Hashem. Many great Rabbis would come to visit the Rebbe in his illness and were amazed. He suffered from a stroke in 5736 (1976), and yet made even more effort to perform mitzvos despite the pain he suffered, including great self-sacrifice for the mitzvos of netillas yadayim and lighting neros Chanukah, despite the great difficulty they involved due to his condition.

On the 21st of Shevat, 5742 (1982), the Rebbe returned his soul to his Maker. The Rebbe was buried on Har HaZeisim (the Mountain of Olives) in Jerusalem. He was succeeded by his son, Grand Rabbi David Mattisyahu Rabinowitz , zt”l, the previous Biala Rebbe of Bnei Brak. He had three other sons, who also became Rebbes, Rabbi Yerachmiel Tzvi Rabinowitz, zt”l, was the Biala-Peshischa Rebbe in the Har Nof section of Jerusalem, Rabbi Yaakov Yitzchak Rabinowitz is the Biala Rebbe in the Ramat Aharon section of Bnei Brak, and Rabbi Ben Zion Rabinowitz is the Rabbi of Lugano, Switzerland.